He has the muscles of Adonis, an ego bigger than the sun, and a very clear desire to get back in my pants. Which would be fantastic if he weren’t a SEAL and I wasn’t a criminal.

Although, I prefer the term avenger.

I’m a hacktivist, cleaning up the cesspool of cyberspace one scam artist and troll at a time, and I sometimes bend a few rules to get justice done.

He’s a military man with abs of glory, sworn to uphold the letter of the law no matter its shortcomings. And if he’d known who—or what—I was, I doubt he would’ve banged me at my best friend’s wedding reception.

Or come back for more.

Which is why he’s now the only thing standing between me and one very pissed off internet troll who’s figured out where I live.

I’m pretty sure he’ll get me out of this alive—and quite satisfied, thank you very much—but I’m also pretty sure this mission will end with me in handcuffs.

And not the good kind of handcuffs.

The Hero and the Hacktivist is a romping fun romance between a SEAL and a twisted hacker by day, drummer by night, complete with epic klutziness, terrible leg warmers, and an even worse phone virus gone wrong. This romantic comedy stands alone with no cheating or cliffhangers and ends with a fabulously fun happily ever after.


I loved Willow and Dax in ROCKAWAY BRIDE but guess what??? They’ve been knocked off their perch as my favourite couple in Pippa Grant World because Rhett and Eloise now hold the title! I know! I too am somewhat in shock.

THE HERO AND THE HACKTIVIST was just so much fun. In addition to my usual snort-laughing when reading one of Pippa’s books, I also found myself cackling and sniggering at the sheer cunning of Eloise Jayne. She is devious, clever, outrageous,  intense, and intelligent. She’s got a keen sense for social justice and plays superhero in her own way to right the wrongs of society. She’s got a mouth on her that often gets her into trouble, yet underneath this tough outer shell, Eloise is pure marshmallow.  There’s a vulnerability and softness to her that I wanted to protect. But since I cannot do this Rhett was there to save the day.

Our hero Rhett may be the middle child in the Elliott clan but he is no shrinking violet. He’s a SEAL. He’s tough, he’s disciplined and inclined to follow the law unlike some people he might know… cough… Eloise… cough. He’s been forced to take a step back from his career and while he sorts out his life, he finds himself in a position to save Eloise – both from bad people and herself.

Rhett and Eloise were fabulous together. They may be poles apart physically and personality wise, but they just clicked. Eloise lives to push Rhett’s buttons and he in turns give as good as he gets. They’re smitten and intrigued with each other. The chemistry between them is explosive, and, forced to spend time together, they learn that maybe they do have some things in common.

Fans of previous books will rejoice because there are plenty of appearances by previous characters.

As 2018 is slowly drawing to a close, I am beginning to consider what some of my top reads for this year are. Without a doubt Pippa holds the #1 spot for comedy.

Here’s to the Tatted Goddess and the Ass of Glory!

Pippa Grant is a stay-at-home mom and housewife who loves to escape into sexy, funny stories way more than she likes perpetually cleaning toothpaste out of sinks and off toilet handles. When she’s not reading, writing, sleeping, or trying to prepare her adorable demon spawn to be productive members of society, she’s fantasizing about chocolate chip cookies. 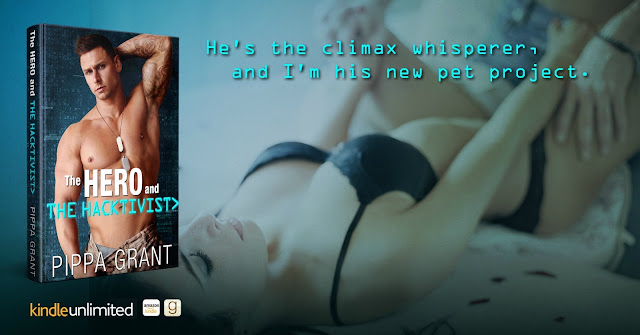