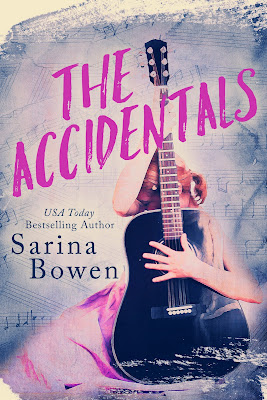 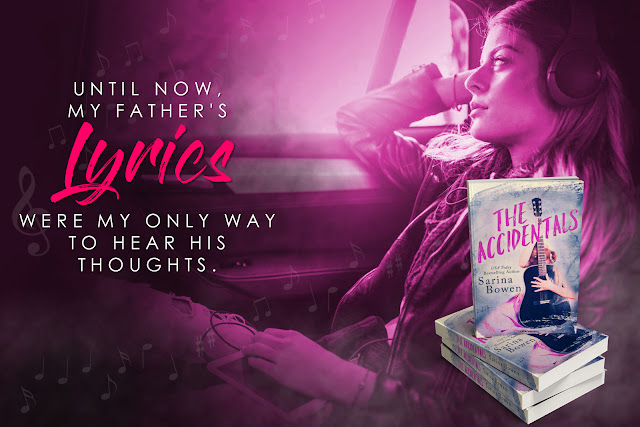 A YA novel from USA Today bestselling author Sarina Bowen.

Never ask a question unless you’re sure you want the truth.

I’ve been listening to my father sing for my whole life. I carry him in my pocket on my mp3 player. It’s just that we’ve never met face to face.

My mother would never tell me how I came to be, or why my rock star father and I have never met. I thought it was her only secret. I was wrong.

When she dies, he finally appears. Suddenly I have a first class ticket into my father’s exclusive world. A world I don’t want any part of – not at this cost.

Only three things keep me going: my a cappella singing group, a swoony blue-eyed boy named Jake, and the burning questions in my soul.
There’s a secret shame that comes from being an unwanted child. It drags me down, and puts distance between me and the boy I love.

My father is the only one alive who knows my history. I need the truth, even if it scares me. 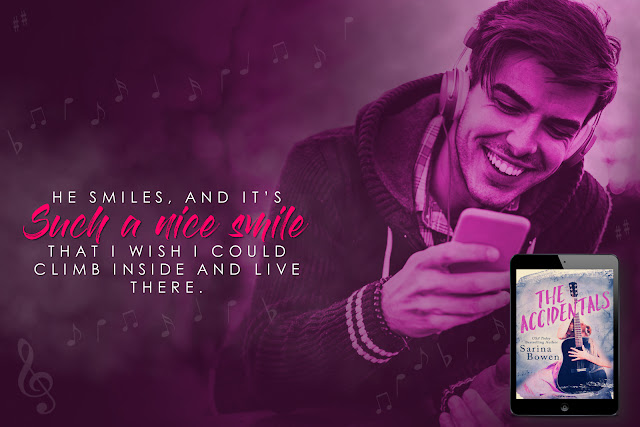 
THE ACCIDENTALS is a departure from other Sarina Bowen books that I’ve read but I enjoyed it a lot.

Rachel’s journey into adulthood is a painful one. She’s lost her mother, she’s never met her rock star father, she’s finishing high school and heading off to college. As a result, she’s losing the only home she’s known as well as her small support network.

Rachel is the book’s narrator. While I never felt disconnected from the book, I did feel at times that Rachel is spectator in her life. It makes sense given the shaky foundation of her life and this distance adds to the isolation she feels. It took me a while to come to this conclusion, and I did spend the early part of the book thinking the story felt somewhat directionless given the little interaction between characters.

Hers is not the only story we focus on. The themes – friendship, relationships, coming of age, developing maturity, love – apply to most of the characters, including the adults. Each character shows a complexity that at times makes them likeable, and at other times unlikeable; no one, including Rachel, comes out of this book as significantly more agreeable than any other character. This appeals to me because it makes the characters more human in their actions.

The writing is engaging. The varied emotions of characters are conveyed really well. I also enjoyed that often the story reveals itself in the things that are not said as much as the things that are. Overall I found THE ACCIDENTALS to be a highly enjoyable read. 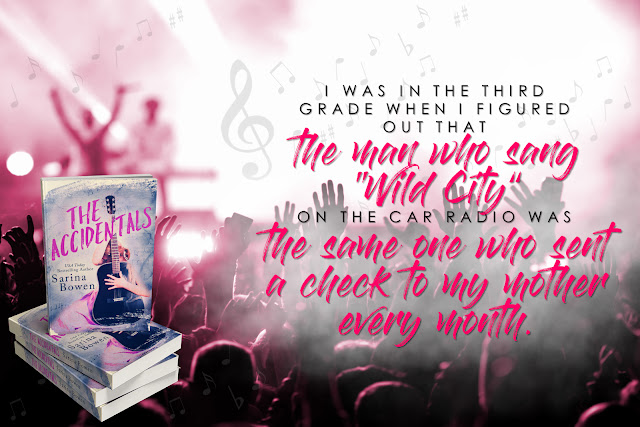 After the last course—chocolate mousse—the three of us go tripping back across the cold lawn in the dark, Aurora in the lead. I’m the tiniest bit tipsy and wearing heels. So naturally I stumble on a frozen clod of snow and nearly fall.

But Jake catches my hand to steady me. “Thanks,” I breathe.

Curiously, his warm fingers remain curled around mine until we reached the door of Habernacker.

I try not to feel ridiculously excited about it.

He lets go when we all reach the third floor. When Aurora opens the door, he follows us inside until we all collapse on the S.L.O., with me in the center.

“Oh! I forgot to steal my plate,” I realize.

Jake reaches into his jacket and pulls out a plate.

“Well done, Mr. Jake!” Aurora laughs. “The party in the annex starts in fifteen minutes.” She heaves herself off the squishy couch. “I have time to redo my makeup.”

I watch her walk over to the stereo, where my phone is already ensconced, and turn on our Christmas playlist. Then she grabs her makeup bag off her desk and leaves the room.

When the door clicks shut, neither Jake nor I speak for a moment. The low chords of a Straight No Chaser song play through our little speakers.

Suddenly, it’s awkward. We’ve been circling each other for a while now—since the night he was trying to be nice and I wrecked it.

“You’re probably sick of a cappella by now,” I say, just to find something to talk about.

But Jake turns slowly toward me and says something unexpected. “Rachel, I need to ask you a question.”

My stomach does a little flip flop, and I turn to face those blue eyes I love so much. “What?” I whisper.

“Well…” He clears his throat. There is a very long pause, during which I hold my breath. “Will you come skiing some time?”

I exhale. “I guess so?” Another beat of silence passes. “That was your big question?” I ask, feeling like I’ve missed something.

His color deepens. “Well, no. I just…” His brow furrows, as if he’s trying to explain some point of astronomy. I love his look of concentration. I’ve missed it.

Jake’s blue eyes lock on mine, and I see how our own orbits might finally collide.

This time, I will not send the moment winging back into space. Instead, I lean an almost imperceptible degree in his direction.

And that’s all it takes.

Reaching up, Jake cups his hand to the side of my face. I’m still processing the sweet touch of his fingers when he leans in farther, his lips brushing the sensitive corner of my mouth. His eyes are tentative, seeking permission. My heart thuds with expectation.

And then—finally—Jake kisses me for real.

We come together the way a well-timed drummer kicks into the chorus of a song—swiftly, and without hesitation.

We broke apart a moment later, eyeing each other while I try not to smile. “Can I do that again?” he asks, his voice rough. “That was my real question.”

“Well, since you asked so nicely…”

Jake makes a low noise of approval, then draws me closer. I reach up for the back of his neck, my fingers grazing that golden patch of skin I’ve always wanted to touch. He kisses me again, his arm finding the velvet waist of my dress and encircling me.

My heart flutters, but not from fear. Warm lips tease mine gently apart. And when his tongue tangles with mine, I lose myself.

He tastes like champagne. Everything is wild and sweet, until the moment Aurora’s voice rings out. “Ay, caramba!”

I feel an unwelcome rush of cool air between us as Jake retreats.
“I did say I was going into the bathroom, right? And not on a trip to Fiji?”
Neither of us says a word; we only look sheepishly at Aurora.

“Just to be clear, now I’m ducking into the bedroom for my coat, which only takes a second.” She steps into the bedroom, and I hear the rustling of fabric. Then she peers dramatically around the door frame. “Good listening! Now I’m going to the party. Will I see you both there? Don’t answer that. We’ll speak later.”

“I’ve seen worse.” She departs, the door closing behind her.

And now I’m self-conscious. Rising, I decide to fiddle with the music playlist. “Do you want to go to the party?”

“I’ll go. But I’m not great at parties. It’s all shouting over the music, drinking warm beer out of a plastic cup.”

“Then let’s not.” My fingers shake as I adjust the volume. I go back over to the sofa and sit down.

“So.” He clears his throat. “Where are you going for break?” As he asks, he takes one of my hands in his, massaging my palm with his thumb.

His light touch is so distracting that I almost forget to answer. “Kansas City,” I manage. “To meet my grandfather for the very first time.”

So I tell Jake the embarrassing highlights of my weird story—that I hadn’t met Frederick until this past summer.

“I guess I’m not that offended now that you wouldn’t introduce me. If the normal waiting period is seventeen years.”

My laugh begins with an unladylike snort. Ah, well. “With me it’s just all soap opera, all the time. Believe it or not, a year ago I was really a boring person.”
“I don’t see how.” He regards me with darting eyes. “You look beautiful tonight.”

But Jake doesn’t seem to care. He slips his arms around my waist. Scooting closer, he slides his lips from my forehead, down my nose and onto my mouth.

And we begin again. 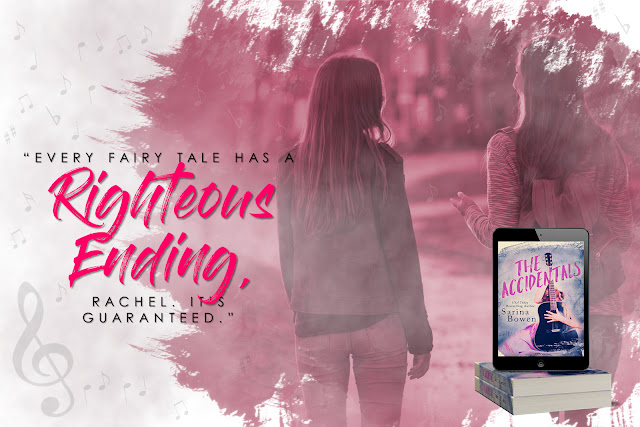