Upcoming Release Book Review: In The Dark by Cara Hunter 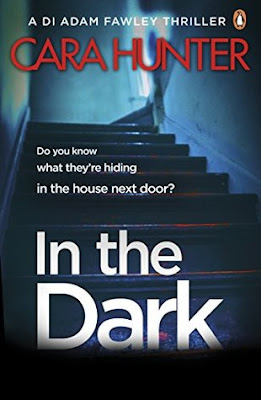 DO YOU KNOW WHAT THEY'RE HIDING IN THE HOUSE NEXT DOOR?

From the author of CLOSE TO HOME, comes the second pulse-pounding DI Fawley crime thriller.

A woman and child are found locked in a basement room, barely alive...

No one knows who they are - the woman can't speak, and there are no missing persons reports that match their profile. And the elderly man who owns the house claims he has never seen them before.

The inhabitants of the quiet Oxford street are in shock - how could this happen right under their noses? But DI Adam Fawley knows that nothing is impossible.

This was my first Cara Hunter book, so DI Adam Fawley and his team are new to me. I really enjoyed their personal stories, especially when they intertwined with the cases being investigated.

IN THE DARK has the team working on two cases: A woman and small child have been discovered after being locked in a basement for several years while an unsolved case is reopened after new leads come to light.

The book held my interest but I was jolted out of the story when written communications such as typed police interviews, TV scripts, newspaper articles, emails etc. were used to move the story along. I’ve realised I am not a big fan of this method.

There are plenty of twists and turns but the story is easy to follow. There are some uncomfortable moments as we discover how some of the characters have been victimised, and it’s easy to imagine this type of thing happening in suburbia today.

The writing is well paced and the tension increases nicely the closer we get closer to the end. The mysteries are solved, leaving no loose ends but I groaned a bit at what I felt was a somewhat far-fetched resolution.

Cara Hunter is a writer who lives in Oxford, in a street not unlike those featured in her series of crime books. Close to Home is her debut featuring DI Adam Fawley, and her second, In the Dark, releases 5 July, 2018.