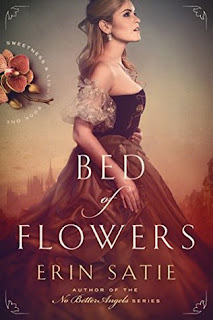 Bonny Reed is beautiful, inside and out.

A loyal friend and loving daughter, she's newly engaged to her small town's most eligible bachelor. She's happy for herself--but mostly for her family, who need the security her marriage will bring.

An old enemy shatters her illusions.

First Baron Loel cost Bonny's family her fortune. Now he's insisting that her fiancé has hidden flaws, secrets so dark that--if she believed him--she'd have to call off the wedding.

How will she choose?
When the truth comes out, Bonny will have to choose between doing what's right and what's easy. Between her family and her best friend. And hardest of all--between her honor and the love of a man who everyone wants her to hate.

Erin Satie is a new-to-me author, and I am so excited that I found her because I absolutely loved Bed of Flowers.

On the surface, the book is about the relationship between an unsuitable pair but by no means is it a fluffy bonnet drama. Instead, what we get is a thoughtful, insightful and perceptive book filled with some really interesting characters as well as a narrative that brings to life the restrictions and limitations of living in these early Victorian times.

I loved both the main characters. Orson Loel may be titled, but even he understands his role as the town pariah is warranted. He is not so much resigned, as he is prepared to accept the verdict of the townspeople, and to live his life within set boundaries. To make ends meet, he grows and sells rare orchids. The descriptions of his flowers and greenhouse provide some wonderful moments in the book. I often felt like I was in that space with him as he cared for and nursed his orchids.

Bonny Reed, our heroine, is fascinating. She is well aware of societal expectations and her place in that society, yet there’s a part of her that fails to realise that as much as those expectations protect her, they can also expose her to harm if she steps outside the constraints. It’s an indictment of the life single women had during those times; they are treated as innocents, told very little about the ways of the world, yet they are expected to recognise these dangers to themselves and their reputation. The results of her deeds impact more than just her, but I found it hard to blame her.

Of the supporting characters, I very early on developed a liking for Cordelia. She is fierce! I was so happy to read that hers will be the next book in the Sweetness and Light series. But she’s not the only one, there are several others who particularly shine in the book, but I’ll let other readers discover them on their own.

I highly recommend this book. It will likely become one of my favourite reads of 2018. 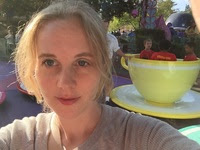 Erin Satie is the author of the dark and elegant No Better Angels series, historical romances set in the early Victorian period. She’s currently hard at work on her upcoming series, Sweetness & Light, which should be just as elegant but not quite so dark.

Erin is a California native who’s lived on the coasts and in the heartland, in tiny city apartments and on a working farm. She studied art history in both college and graduate school—research is always her favorite part of starting a new book.

Her favorite part of finishing a book, whether reading or writing, is the happily ever after.