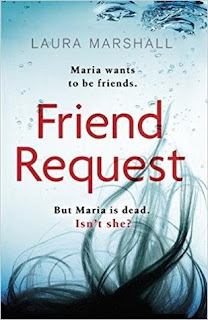 When Louise Williams receives a message from someone left long in the past she feels sick.

Because Maria Weston has been missing for over twenty years. She was last seen the night of a school leavers' party, and the world believes her to be dead. Particularly Louise, who has lived her adult life knowing herself responsible for Maria's disappearance. But now Maria is back. Or is she?

Friend Request was a great read. I really liked it.

I was at school at approximately the same time the character of Louise was, so I lived and understand a life prior to social media. I found the portrayal of a pre/post social media life to be accurate and I admit to squirming while reading the parts set in the past. It took me right back to those horrible times in high school; situations were blown out of proportion, who you associated with did reflect on you, and friendships could become lifelong or fleeting. Yet at the time it felt like the be all and end all.

In the present day, Louise finds herself accepting a friend request from an old school friend who was presumed drowned back in high school. You know things are not going to go well for her from this point. The initial friend request is the beginning of a tension filled journey for Louise, who is scared of digging up that part of her life, knowing she did not act kindly towards Maria. Equally, she realizes that sweeping the issue under the carpet is not a solution either.

As the story moves back and forth in time, we learn more about Louise, Maria, and the several other friends who all played a part in the ill-treatment of Maria; but who, if any of them, actually killed Maria? Or is Maria really alive and is using the occasion of a high school reunion to expose them all?

I found the book really well paced as it follows Louise’s state of mind. We start with uncertainty and fear, followed by a desire to solve the mystery. Towards the end, the story veers off into several directions, leaving Louise and us readers even more uncertain than ever. The stories people tell seem so plausible, but perhaps they are lies? I happily went along for the ride and thought the final solution to be believable. 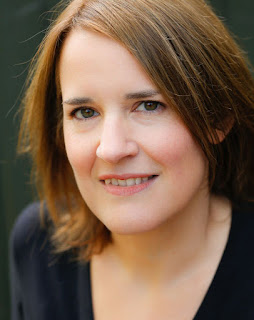 Laura Marshall grew up in Wiltshire and studied English at the University of Sussex.

After almost twenty years working in conference production, in 2015 Laura decided it was time to fulfil a lifetime's ambition to write a novel, and enrolled on the Curtis Brown Creative three month novel writing course.

In 2016, her first novel, Friend Request, was runner up in the Bath Novel Award and shortlisted for the Lucy Cavendish Fiction Prize. It was published by Little, Brown in the UK in July 2017, selling over 250,000 copies in the UK to date and becoming a Sunday Times top ten bestseller in paperback, and kindle number one bestseller. Friend Request has sold in a further seventeen territories around the world including the USA, Germany, France, Italy and the Netherlands.

Laura lives in Kent with her husband and two children.