Siena Calabrese is no longer the prized daughter of la famiglia. Her transgressions against her brothers and family have stained more than just her reputation. Her best chance at keeping breath in her lungs would be to sit down and shut up like she was taught to do. She definitely shouldn’t be feeding information to her family’s enemies. And yet, she is still willing to risk it all for a chance at forever with Johnathan Marcello. After everything, how could she not?
The disgraced one …
Johnathan Marcello’s life and secrets have now been put on display for everyone to see. There’s no hiding the things he’s tried to keep hidden, but maybe that’s the best thing that could have happened. Now he’s about to walk straight into a war between rival mafia families, and he’s got choices to make. His love is on one side, he’s on the other, and everybody is playing for keeps. He’ll play the game just as dirty as anyone else to get what he wants, even to the detriment of himself. For her, how could he not?
The shamed one …
It’s time that the forgotten king takes back his throne. It’s already been too long since it was taken from him.
But when has anything in this life been easy?

*****
My Thoughts
Disgrace is the conclusion to Bethany Kris’ book duet featuring John and Siena. After a jaw dropping cliffhanger at the end of Loyalty (book one), I was somewhat worried how the fallout had affected John and Siena. As eager as I was to start, part of me wished to remain ignorant.

John’s battle with bipolar disorder dominates a large portion of the book as he once again learns not only to help himself but also to open himself up and allowing others to help him. As from the start, Siena’s support is unwavering and one thing I really enjoyed about the book is that their love for each other never wavered, irrespective of what else may be going on. And this includes the couple spending a significant time apart in this book.

There is much manoeuvring in terms of family business and this adds additional uncertainty to Siena and John’s lives. I won’t disclose any spoilers but the outcomes lead to a big shake up in this mafia world.

Disgrace ties up John and Siena’s story well and once again I enjoyed Kris’ writing.

Fresh out of prison after serving a three-year sentence, Johnathan Marcello wants to get back to normal business as a mafia capo. The rules set out for him are clear—keep out of trouble, maintain a low profile, and stay stable. But stability is a delicate balance for a man like John, and shaky ground is only a single step away.
A chance encounter with a blue-eyed woman might just change his whole world.
Siena Calabrese’s life revolves around cooking numbers, and scrubbing books clean. After all, a girl is only useful to men in the mafia, if she isn’t totally useless. As long as she does what they want, then she can maintain the illusion of freedom. But illusions are only delusions in the grand scheme of her life, and reality is far more dangerous.
A man with secrets might just be the one thing she didn’t know she needed.
In this life, family is everything. Or, that’s how it should be.
Distrust. Love. Betrayal. Loyalty.
Mix it all together, and it makes for a volatile city.
A war is coming.

Bethany-Kris is a Canadian author, lover of much, and mother to four young sons, one cat, and two dogs. A small town in Eastern Canada where she was born and raised is where she has always called home. With her boys under her feet, snuggling cat, barking dogs, and a hubby calling over his shoulder, she is nearly always writing something … when she can find the time. 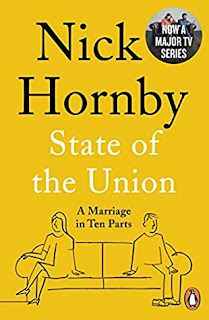 Book Review: STATE OF THE UNION by Nick Hornby


Tom and Louise meet in the pub opposite their counsellor's office ten minutes before their session is about to start. Their marriage is in a state of crisis because Louise has been unfaithful, after a long period in which Tom wasn't interested in having sex with her at all.
The plan in these ten minutes is to talk about the agenda for the session, , what they talked about last week, what they never talk about, and what is wrong with the couple whose counselling slot immediately precedes their own. Frequently they talk about things that are really not important to their difficulties but which animate and provoke them anyway.
In this way, we learn about the history and the future of a marriage. Anyone who has ever been in a relationship made more complicated by time, and familiarity, will recognise themselves in this brilliantly funny comedy written by one of our most beloved writers,one who captures relationships like few others.


I read somewhere that th…