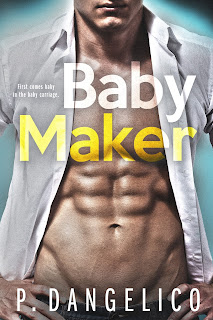 Stella Donovan’s biological clock is a ticking time bomb.
The successful financial manager has spent her adult life building a career and neglecting her personal life. Problem is, she doesn’t believe in marriage. Not after watching her mother be treated like garbage by her father. Nope, marriage is not for her. All she wants is a baby. All she needs is a man to agree to her terms.
Dane Wylder, recently retired NFL tight end and future Hall of Famer, wants a baby.
Naturally, marriage is off the table. He’s not the marrying type. Women are great––as long as they’re trying to get into his bed and not his heart. But after years of living only for himself, he’s ready to be a father.
Sparks fly when a successful financial manager and a legendary football player enter into a legal agreement to have a kid together. They planned on everything––they just didn’t plan on each other.

Baby maker is a fun, easy to read romantic comedy.

There’s plenty of humour peppered throughout the book even though the reasons for Dane and Stella creating a baby are serious.

I could poke many holes at the main characters; Dane because of his manwhore ways and Stella for choosing him over a turkey baster-style insemination after knowing him for such a short time. Credibility is stretched thin but Baby Maker is an entertaining read if you don’t take it too seriously.

The book did leave me feeling lacking in the communication-by-eyebrow department. There was a cornucopia of communication via eyebrows; raised, furrowed, winged, bunched, half-cocked, arched and likely more. When I notice and start highlighting the number of times eyebrows are mentioned, it’s excessive. 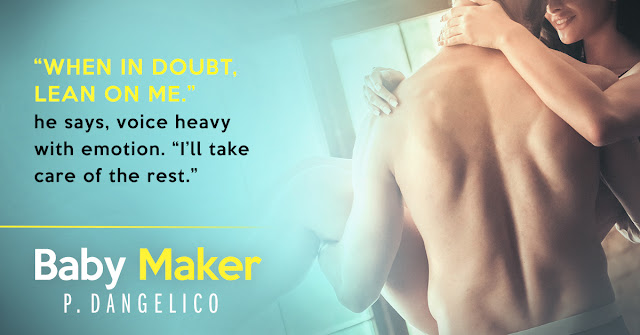 Grabbing the pot of freshly brewed coffee from the coffee maker, he stares into the pot then drinks from it. I don’t bother to tell him it’s decaf. Throat working as he swallows, he holds up his index finger.
I’ve got a finger for him, the middle one.
“I don’t know what’s gotten into you but I’ve had enough.” He continues drinking. “And word of caution, if you come back to New York and continue to treat me like I’m cattle, a possession, you will damage this friendship beyond repair.”
He places the pot down, his eyes downcast as he leans on the counter for support. “I’m sorry…I was a real asshole last night and––”
“Last night?!” I shout. “How about for the past week.”
“Well you’re not helpin’ the situation!” he shouts back, his eyes sparking, then winces again.
My jaw hangs in disbelief. He can’t be serious. Is he really blaming me?
“The hell are you talking about? You’re blaming me? Me?! You’ve been unbearable––when you’ve been around, that is. Usually you’re running in the opposite direction. But somehow in your twisted little male peanut sized brain, it’s my fault?!”
“Yes, goddamit! Dancin’––smilin’ at that fucking cowboy!” His hand slashes through the air as if he’s indicating to someone in the corner. The veins near his temple pop up. Eyes impossibly wide, he advances on me, stopping a mere foot away. “You never smile at me like that!”
Huh? “What does that have to do with anything?!”
“Because I’m jealous! Okay! And you’ve made it very clear you’re not attracted to me but all I can think about is this!”
He’s on me before I can blink, arms crushing me to him, kissing me like I hold the last breath of air on the planet and he means to steal it.
A beat later he stops. His lips against mine he murmurs, “Kiss me back…please kiss me back.”

Meet P. Dangelico:
P. Dangelico loves romance in all forms, cuddly creatures (four legged and two), really bloody sexy pulp, the NY Jets (although she’s reconsidering after this season), and to while away the day at the barn (apparently she does her best thinking shoveling horse crap). What she’s not enamored with is referring to herself in the third person and social media so don’t expect her to get on Twitter anytime soon. Oh, and although she was born in Italy, she’s been Jersey Strong since she turned six.