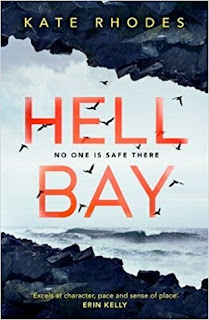 DI Ben Kitto needs a second chance. After ten years working for the murder squad in London, a traumatic event has left him grief-stricken. He’s tried to resign from his job, but his boss has persuaded him to take three months to reconsider.

Ben plans to work in his uncle Ray’s boatyard, on the tiny Scilly island of Bryher where he was born, hoping to mend his shattered nerves. His plans go awry when the body of sixteen year old Laura Trescothick is found on the beach at Hell Bay. Her attacker must still be on the island because no ferries have sailed during a two-day storm.

Everyone on the island is under suspicion. Dark secrets are about to resurface. And the murderer could strike again at any time.

I enjoyed reading Hell Bay. Kate Rhodes has done a great job of taking us on a trip to small island UK; it’s remote, it's desolate, it's beautiful.

When well written, which Kate Rhodes has done, characters in these settings fascinate me. Not only do I enjoy the historical aspect - especially people's ancestry as it relates to their surnames - but there’s a whole social hierarchy within a small group of people. It’s like a finely balanced machine where people know their place, for the most part keep their place all the while keeping the secrets of those around them.

It’s no wonder you need a police officer like Ben Kitto. Even though he left the island to pursue a career, he is one of theirs and what little talking islanders will do, they will say it to him and not an outsider.  This does not mean the job’s an easy one. Not at all. There are just some secrets people want to remain just that, a secret.

I was engaged from the start and was surprised by the final revelations. The clues are subtle but they are there. One again, I missed them. But hey, where’s the fun in figuring it all out before the end?

I can't wait for the next DI Ben Kitto book.

I was born in South London, the second daughter of two teachers. I went to the University of Essex and completed a doctorate on the playwright Tennessee Williams. As soon as I left university I began work as an English teacher and have taught at universities in Britain and the United States.

I am lucky enough to write full-time now, and live in Cambridge with my husband Dave Pescod, also a writer. My study has a great view of cows grazing on Stourbridge Common down to the river Cam, perfect for daydreaming. I am very fond of my three step-sons, Jack, Matt and Frank, and have recently become step-granny to Freddie.