The English translation of this book is due to be published in February 2020, but thanks to Netgalley I was privileged to obtain an advance review copy. This book has quite an impact and I hope people of people read it upon its release. I'll definitely be posting again when the book is released. 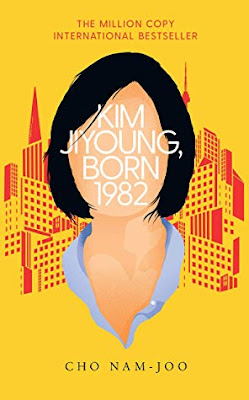 Kim Jiyoung is a girl born to a mother whose in-laws wanted a boy.


Kim Jiyoung is a sister made to share a room while her brother gets one of his own.

Kim Jiyoung is her own woman.

Kim Jiyoung is every woman.

Kim Jiyoung, Born 1982 is the South Korean sensation that has got the whole world talking. The life story of one young woman born at the end of the twentieth century raises questions about endemic misogyny and institutional oppression that are relevant to us all.


Set in South Korea, KIM JIYOUNG, BORN 1982 by Cho Nam-Joo, really paints a vivid picture of the myriad struggles women face simply because of their gender. The plight of women living in a male-dominated society will likely not be a surprise to many women readers, irrespective of where they live, but this fictionalised format still made me want to rage with anger and sadness. I was both infuriated and discouraged.

The fictional narrative is supported with references from official reports and studies. This might disengage some readers but I appreciated the foundation upon which the story was built. I believed what I was reading.

This is by no means an uplifting read, but it is educational and stirring. I highly recommend it.


Cho Nam-joo is a former television scriptwriter. In the writing of this book she drew partly on her own experience as a woman who quit her job to stay at home after giving birth to a child. Kim Jiyoung, Born 1982 is her third novel. It has had a profound impact on gender inequality and discrimination in Korean society, and has been translated into 18 languages.