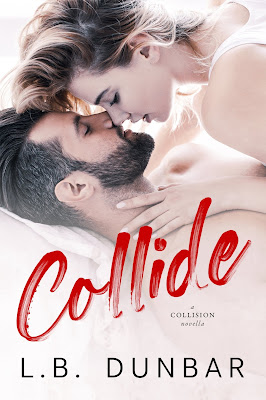 Ivy Carrigan doesn't know what she wants.
Daughter of a famous female rock star, it's difficult to decide who to trust, who to believe in, so when Ivy finds herself in a predicament, it's hard to determine Gage Everly's motive. He couldn't possibly love her, including her secret.

Gage Everly knows exactly what he wants.
From the moment he met Ivy, his world spun out of control. He's never wanted anyone as much as he wants her, secret and all. Now, if he could only convince her to take a chance on him.

"When two stars collide, Ivy, they either collapse or merge to form something better. You and me. We collide, and we'll be so much more. Together."

Looking for a committed hero from page one? I present to you Gage Everly from L.B. Dunbar’s COLLIDE. He may be young but his focus is unwavering in its determination that Ivy Carrigan knows exactly how he feels about her.

I thoroughly enjoyed Gage and Ivy’s story. I know them from Dunbar’s Sexy Silver Foxes series but here we go back in time to see how they met and fell in love.

Theirs is not a smooth romance: both are trying to move on after losing people in their lives, their future plans are seemingly at odds and they both have a public persona that often results in external pressure from people who have vested interests.

With all of this, what I enjoyed about the story is that Dunbar never took focus from our couple. She made them real. They argued, they loved, they were uncertain, they had good intentions that didn’t always go to plan but always, always, there was a lure, a pull that held them together.

I enjoyed getting to know Gage’s bandmates, Jared and Petty, better and of course Ivy’s Uncle Tommy is always a treat. It was great to see him in this story that takes place prior AFTER CARE.

I believe COLLIDE is meant to be a novella, but it’s longer than some novels I read. This is not a complaint. Consider it a forewarning to find a comfy chair and set aside enough time to read it; you’ll likely want to finish it in one go. 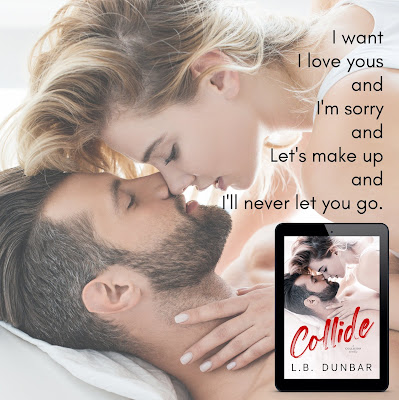 I’ve been accused of having an over-active imagination. To my benefit, this imagination has created over twenty novels, including the creation of a small-town world (Sensations Collection), rock star mayhem (Legendary Rock Star series), MMA chaos (Paradise Stories), rom-com for the over forty (The Sex Education of M.E.), and a suspenseful island for redemption (The Island Duet).

My life revolves around a deep love of reading about fairy tales, medieval knights, regency debauchery, and strong alpha males. I love a deep belly laugh, a strong hug, and an occasional margarita. My other loves include being mother to four grown children and wife to the one and only.