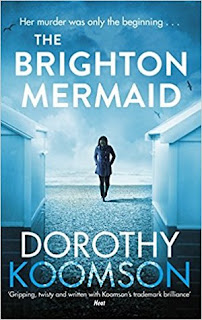 Teenagers Nell and Jude find the body of a young woman and when no one comes to claim her, she becomes known as the Brighton Mermaid. Nell is still struggling to move on when, three weeks later, Jude disappears.

Twenty-five years on, Nell is forced to quit her job to find out who the Brighton Mermaid really was – and what happened to her best friend that summer.

But as Nell edges closer to the truth, dangerous things start to happen.

Someone seems to be watching her every move, and soon she starts to wonder who in her life she can actually trust…

Fast-paced and thrilling, The Brighton Mermaid explores the deadly secrets of those closest to you.

What a bizarre book The Brighton Mermaid turned out to be. I liked it. In fact, I liked it a lot but the story and the characters left me with my mouth hanging open in astonishment more than once.

In 1993, a young Nell and best friend Jude discover a body on the beach; a young woman with a distinctive mermaid tattoo that is never identified. This discovery impacts not only Nell and Jude but their entire families, and in ways I never imagined. Every character in this book was influenced – typically in a damaging way - by this event. Every single one! I found the characters interesting to read about I cannot say I very much liked any of them. There’s a veneer of civility and normality that most of them wear but scratch a little below the surface and there’s another person entirely. But they were human; flawed humans and that’s what kept me reading to the end. That, and to discover the mystery of the Brighton Mermaid.

The writing is well paced and well written. You need to be focused while reading because the book moves between 1993 and the present day, plus various times in between. Further, it’s told in multiple points of view, so you need to pay attention.

I really enjoyed this book. It was the first Dorothy Koomson book I have read and I definitely want to read more of her books. 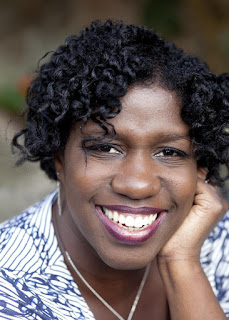 Hello, my name’s Dorothy Koomson and I’ll try to make this bit that’s all about me as interesting as possible.

I wrote my first novel called There’s A Thin Line Between Love And Hate when I was 13. I used to write a chapter every night then pass it around to my fellow convent school pupils every morning, and they seemed to love it.

I grew up in London and then grew up again in Leeds when I went to university. I eventually returned to London to study for my masters degree and stayed put for the following years. I took up various temping jobs and eventually got my big break writing, editing and subbing for various women’s magazines and national papers.

Fiction and storytelling were still a HUGE passion of mine and I continued to write short stories and novels every spare moment that I got. In 2001 I had the idea for The Cupid Effect, I signed up with my first publisher a year later and in 2003 my career as a published novelist began. And it’s been fantastic. In 2006, third novel, My Best Friend’s Girl was published. It was incredibly successful – selling nearly 90,000 copies within its first few weeks on sale. Six weeks later, it was selected for the Richard & Judy Summer Reads Book Club and the book went on to sell over 500,000 copies. Oh, there I go again, this is meant to be about me, not my novels.

Okay, back to me. Nearly ten years ago I spent two years living in Sydney Australia, and returned to England to eventually move to the south coast. I love living by the sea. There’s nothing like a good walk along the seafront to clear your head. Those who’ve read my later books will know that a lot of them have been set in Brighton and its surrounding area, often with a good dose of Leeds and South London thrown in.