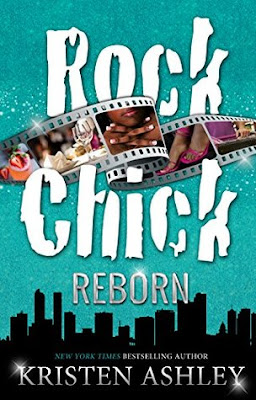 As a Rock Chick, Shirleen Jackson lived through all the kidnappings and explosions. Along the way, she also watched the dramatic love stories that came with those rides unfold.
But long ago, Shirleen made her choice. It affected who she was and would always be. She decided to settle for what she had and not want more. She had good friends. She was raising two fine young men who weren’t hers, but she loved them anyway. She was good. And then Moses Richardson crashed into her life, literally…and deliberately. Moses has different ideas about Shirleen. He’s more interested in the Shirleen of now, mostly because she’s interesting. And funny. And loyal. Smart. Beautiful. But Moses has a big challenge on his hands. He has to convince Shirleen of all that. And then convince her she deserves to have more.


Well, oowee! Looks who’s back! It’s the Rock Chicks! And this time it’s Shirleen Jackson’s turn in the limelight as we journey with her on the path to finding her own true love and happy ending.

Moses Richardson is the man who has his eye on our Shirleen and he does an excellent job of showing her, the Rock Chicks, the Hot Bunch, and us readers why he’s the perfect man for her.

It’s not all laughs and good times – even though there are plenty of those – as we discover more about Shirleen’s past as well as the years that Roam and Sniff have spent under her care.

I thoroughly enjoyed this book. This is the writing from Kristen Ashley I have been missing. Most characters from the series make an appearance, and Kristen Ashley did a great job in weaving some of the great Rock Chick shenanigans into the storyline. And the epilogue! I never saw that coming but it left a huge grin on my face.

Kristen Ashley is the New York Times bestselling author of over sixty romance novels. She's a hybrid author, publishing titles both independently and traditionally, her books have been translated in thirteen languages and she's sold nearly three million books.

Born in Gary and raised in Brownsburg, Indiana, was a fourth generation graduate of Purdue University. Since, she has lived in Denver, the West Country of England, and she now resides in Phoenix. She worked as a charity executive for eighteen years prior to beginning her independent publishing career. She now writes full-time