New Release Book Review: For The Sake of His Heir by Joanne Rock 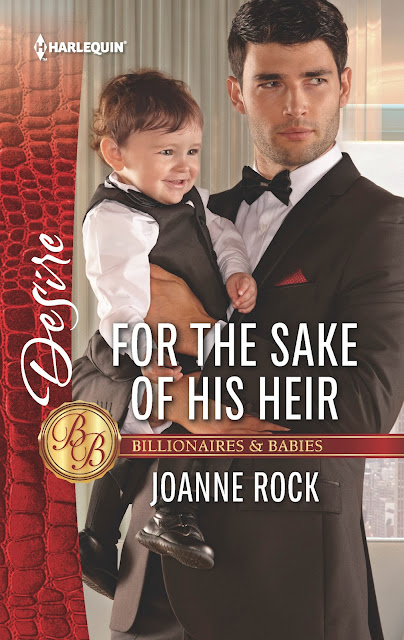 When a marriage of convenience is the only answer…things get inconvenient.

Gabe McNeill is done being manipulated. By everyone from his ex-wife who abandoned him and their baby to the grandfather forcing him to remarry. Now the only way Gabe can ensure his son’s inheritance is if Brianne Hanson agrees to be his bride. They’ve always kept things strictly business and this is no different…until she falls into his bed and all bets are off! 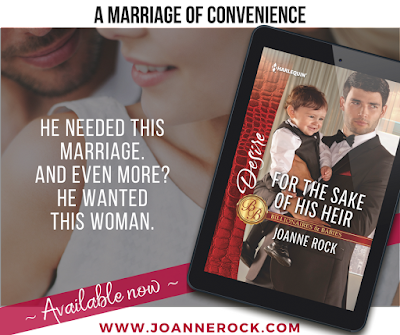 For the Sake of His Heir is a nice addition to the Harlequin Desire line.


In this book, Gabe McNeil finds himself wanting a marriage of convenience to not only fulfil his grandfather’s wishes so he gets a slice of the family business for his son but also to create a stable family in the event his ex-wife ever decides to fight for custody for their son.

Brianne Hanson, Gabe’s landscape gardener, is who he asks to marry.

Brianne agrees to not only help Gabe for his reasons but for her own. Brianne’s grandmother is not only suffering from poor health but she is being harassed by her daughter-in-law, Brianne’s stepmother.

I really like Brianne. Her childhood was not a happy one and she carries many of these issues into her adult life. There was a depth to her character that I did not see in Gabe in this book. The Gabe in this book did not seem like the Gabe in earlier books, especially in his drive to create beautiful woodwork.

The story whisks us from sunny Martinique to cold NYC and on to desolate and even colder Wyoming as Brianne and Gabe fight their feelings and later fight for their marriage. They may come from polar financial positions but they are suited as a couple.

I enjoyed meeting the Wyoming relations. I assume the setting was done as a set up for their own books in the future. 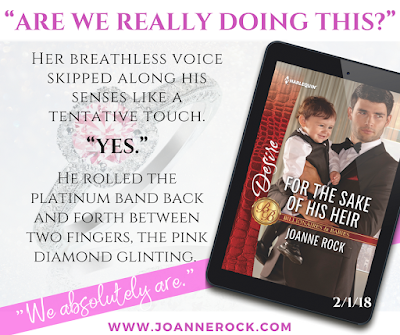 The curtain of hazy snow and steam around them gave the sense that they were all alone in the world, a veil of cold mist separating them from everything but one another.
Or maybe the wine was going to her head. She felt a sweet happiness all over to be with Gabe. It was dangerous, perhaps, to feel that way. But she’d never been with a man like him, someone strong and noble, kind and warm hearted.
And so very sexy.
Her eyes dipped to the top of his chest above the water as he drained his glass and set it aside, his triceps flexing in a way that made her want to take a bite.
“I certainly didn’t expect a wedding gift.” He shook his head, a wry smile kicking up one side of his mouth. “We’ll have to make our own rules for this marriage since the regular conventions aren’t going to apply.”
“Like tonight, for example.” She hadn’t meant to say it out loud, but there it was, floating on the cold breeze before she could take it back. Drawing a steadying breath, she explained herself. “I don’t need to worry about your expectations because—”
“Because there are none.” He cupped her shoulders with his hands, a warm weight that anchored her in the swirling water. “I thought we deserved this time together to get to know each other as more than friends, but I will be glad just to talk to you tonight. To learn how to make you happy.”
“I know that.” She wanted to close her eyes and concentrate on how his hands felt on her. To soak up all the sensations of being with him. “You never made me feel like you brought me here for more than that, but still…it’s a wedding night. I can’t deny I’ve been thinking about the possibilities of what that means.”
His thumbs skated a slow circle over the tops of her shoulders, a subtle touch that set the rest of her on fire.
“I’ve been doing plenty of thinking of my own,” he admitted. “But that doesn’t mean we have to act on it.”
If he kept touching her, though, the possibility of her launching across the hot tub to kiss him was very real.
“When I said I wasn’t all that experienced, I didn’t mean to suggest I’ve never been with a guy. Of course I have.” Though she had kept her virginity longer than any of her friends, haunted by her stepmother’s taunts long after they should have lost their power to hurt her. “I just don’t feel like I ever got high marks. You know?”
“Sex shouldn’t be a graded assignment.” He said it with one-hundred-percent seriousness.
But she laughed anyway, because it was a strange conversation for a wedding night. “Right. I get that.” She flipped a damp piece of hair out of her eyes as she warmed to the discussion. “But when I decided to lose my virginity, I think I was probably…too determined. I did some research and felt well-prepared, but in the end—epic fail.” She shook her head, remembering the expression on her boyfriend’s face afterward. It hadn’t been blissful pleasure.
More like being shell-shocked, maybe.
“The thought of you researching to the point of being over prepared is going to animate some very good dreams for me.” He never stopped touching her. His thumbs trailed down the satin straps of her bra in the back. Then in the front. Over and over. “It’s my turn to be intrigued.”
“I think I was studying techniques that were too advanced for a beginner.” She shrugged, the water around her splashing with the movement. “But I don’t like looking foolish, and I’d waited so long to give sex a try that I put a lot of pressure on myself not to make it obvious that I was a first-timer.”
“What about afterward?” Gabe’s knee grazed hers under the water and she didn’t skitter away because it felt too good. “Didn’t things get better once the first time was out of the way?”
“I wasn’t keen to repeat the experiment at the time.” She retrieved her wineglass and took another small sip. “But now, I think maybe I’d like to.”

Four-time RITA nominee Joanne Rock has never met a romance sub-genre she didn't like. The author of over eighty books enjoys writing a wide range of stories, most recently focusing on sexy contemporaries and small town family sagas. An optimist by nature and perpetual seeker of silver linings, Joanne finds romance fits her life outlook perfectly--love is worth fighting for. A frequent speaker at regional and national writing conferences she enjoys giving back to the writing community that nurtured and inspired her early career. She has a Masters degree in Literature from the University of Louisville but credits her fiction writing skills to her intensive study with friend and fellow author Catherine Mann. When she's not writing, Joanne enjoys travel, especially to see her favorite sports teams play with her former sports editor husband and three athletic-minded sons.