Lacey Meyers is on the fast track to success. Living in Boston, working for a major retailer, and up for a promotion. Fate intervenes and sends her back to her hometown of Fair Bend, North Carolina. She hasn't spent more than a few days back home in ten years.

Will sparks fly when she runs into Mason Peters, the man she left behind? When faced with the choice to stay or go, which path will she choose this time? Join Lacey in this holiday story of going home again, reconnecting with people from the past, and making choices about life and love.

This book definitely falls under the umbrella of a seasonal holiday romance and it could easily form the basis of a movie on the Hallmark Channel.

It’s a light, sweet read set in small town USA and, with an audio time of approximately 3 hours, offers a good dose of entertainment without needing a lot of time invested; time being at a premium during the holidays when readers turn to books like this.

What I particularly enjoyed about this second chance romance is that it was two people whose lives cross a second time, which proves to be the right time for them both. Both Lacey and Mason made choices that were right for them 10 years ago. And now, it’s a rediscovery of each other as somewhat new people. There is some melancholy about lost chances but overwhelmingly it’s a story about knowing when to stay, when to leave and when to reassess your course in life.

A special mention goes to Alexia, the popular, sometimes ‘mean girl’ from high school, who shows that people can change and are worth getting to know the second time around...or maybe that only happens in fiction?

Amanda Strebling does a good job of narrating both male and female voices. There’s some mispronunciation of a couple of words but nothing that impacts the overall story. Alexia again shines through in the narration. 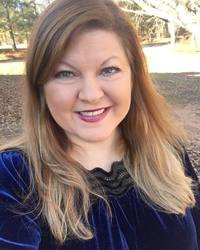 Angie Ellington is the internationally selling author of seasonal romances.  When not writing, Angie enjoys spending time with her husband & pets.

"A Moonlit Hearts Romance" is the series title, which includes standalone novellas; one for each season.