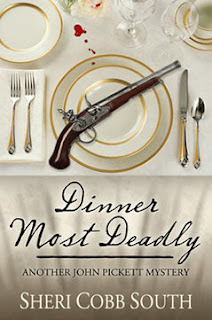 When Julia, Lady Fieldhurst, returns from Scotland restless and out of sorts, her friend Emily Dunnington plans a select dinner party with half a dozen male guests from whom Julia may choose a lover.

But Emily's dinner ends in disaster when one of her guests, Sir Reginald Montague, is shot dead. When Bow Street Runner John Pickett is summoned to Emily's house, he is faced with the awkward task of informing Lady Fieldhurst that their recent masquerade as a married couple (Family Plot) has resulted in their being legally wed.

This was my first John Picket mystery and I am just sorry I had not discovered them sooner. The book was entertaining and fun to listen to as it contains many of the things I like to read about. There’s a mystery to solve, a romance to sigh over and it takes place during Regency England, a time period that I find fascinating, especially from a social history perspective.

Though the romance between John Pickett and Julia, Lady Fieldhurst develops across the series, you can pick a book midstream – like I did – and not be lost. Each mystery begins and is solved during the one book and the romance arc develops nicely. You understand what has gone on before but there are no detailed spoilers.

The writing is wonderful. There is no purple prose here. It’s crisp, expressive and articulate. The openness of some of the characters may not be in keeping with the times but it works well in telling this story to a 21st century audience who may not understand the nuances of Regency times; It was definitely a time where you could say much without using words at all.

Joel Froomkin’s narration is excellent. His portrayal of each character is very well done.  The character of John Pickett is the star. His romantic feelings for Julia, his resignation at not being ‘the right sort’ for her, his desire to honour the man who helped him rise to his current position in society all come through in the narration.

The identity of the murderer is kept until the end. I did not guess who it was, but then I rarely do. I could find no fault in the steps and logic taken to determine who committed the murder. In fact, it’s a nice change of pace to read about solutions that don’t rely on technology to help solve a crime.

Finally, a special mention goes to the character of Emily Dunnington. She is an excellent representation of what was expected of and what was condoned for a woman of her standing  but underneath this, she was still a person with thoughts and feelings who was trapped by her circumstances. I loved hearing about her life and listening to her advice to Julia.

I was given this free review copy audiobook at my request and have voluntarily left this review. 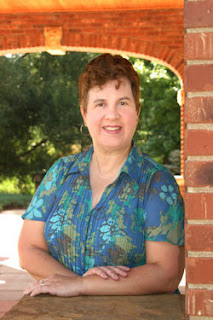 At the age of sixteen, Sheri Cobb South discovered Georgette Heyer, and came to the startling realization that she had been born into the wrong century. Although she doubtless would have been a chambermaid had she actually lived in Regency England, that didn’t stop her from fantasizing about waltzing the night away in the arms of a handsome, wealthy, and titled gentleman.

Since Georgette Heyer was dead and could not write any more Regencies, Ms. South came to the conclusion she would simply have to do it herself. After honing her craft on five young adult books for Bantam’s long-running Sweet Dreams series (the first of which, Wrong-Way Romance, is a collector's item today), she tried her hand at the genre she had loved for so long. Her first Regency romance, The Weaver Takes a Wife, was published in 1999, to critical acclaim.

In addition to her Regency romances, she is also the author of a series of Regency mysteries featuring idealistic young Bow Street Runner John Pickett, described by All About Romance as “a little young, but wholly delectable.”

A native and long-time resident of Alabama, Ms. South recently moved to Loveland, Colorado, where she has a view of Long’s Peak from her office window.