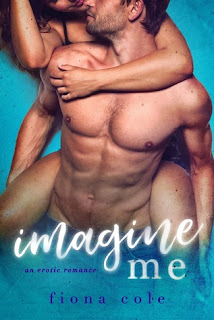 Shane’s her brother’s best friend and thirteen years older than her. Juliana knows his desire to be the loner and to never settle down.
But none of that stops her from showing up at his hotel room late one night.
Months later, she imagines every scenario for when she runs into Shane again. However, she never imagined him brushing off their scorching night together. She never imagined him calling her a ‘little girl’ who can’t handle a man.
His words ignite a fire in Juliana. If she has to date every single guy in Cincinnati, she’ll prove that she is more than capable of “handling” a man. Except Juliana and Shane can’t stay away from each other, so they set up some rules; only sex, and no telling her brother.
It doesn’t take long for the sex to turn into feelings, and Juliana can feel his icy exterior melting. Is he willing to risk his best friend for a chance at love?
For Juliana, that might be too good to imagine.

Giveaway
Signed paperbacks for Where You Can Find Me, Deny Me & Imagine Me 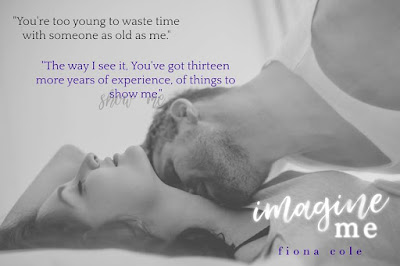 Upfront, let me say this was a rare 5-star read for me. This book is filled with so many good things; I don’t even know where to start. I loved it!
Shane, our hero, is 38 years old. A demanding career in law enforcement underpinned by a childhood within the foster care system, sees Shane adopt a no-commitment policy when it comes to relationships.Our heroine, 25 year-old, Juliana, is the ‘baby’ of the family. She’s stifled on all sides by her parents, her ex-boyfriend and Jack, her over-protective older brother. She’s a qualified scientist, yet her achievements are dismissed as her family try and push her towards a safe life as a wife and lady-who-lunches.Shane and Julianna spent a night of hot passion a year ago at Jack and Lu’s wedding. Jack is not only Julianna’s older brother, he is Shane’s best friend and a person Shane considers family. Another reason for Shane not get involved with Julianna.While Julianna’s move to Cincinnati wasn’t because of Shane, she would not say no to spending more time with him. Shane’s rejection of Julianna stems from not only their age difference and levels of experience but also not wanting to damage his strong friendship with Jack. Even though Shane may be saying no, his actions and body are saying yes, yes, yes. When they come together, Shane and Julianna are explosive. They have some seriously hot times between the sheets. And against the wall. And in a car. And … well, you get the picture.Not only are the sexy times scorching but these two make love. You can feel the love coming off the page! The author does a brilliant job of conveying not only the physical aspects but also the emotional ones. Even when Shane doesn’t recognise his feelings, we readers do and it’s magical.And just in case you’re wondering, yes, our couple do spend time together outside of the sexy times. They get to know each other, often more through their actions than words. They talk to each other and trade witty banter. They have fun together. They revel in just being with each other.Unfortunately, Shane’s attempts to keep things casual and his unwillingness to be in a relationship lead to him lash out verbally at Julianna when she confesses her love for him. His taunts of ‘it’s not worth it’ result in a heartbroken Julianna severing contact and attempting to pick up the pieces and move on.Never fear! Our couple can’t stay away from each other. And if you’re after a hero who knows how to grovel, Shane’s your man. No spoilers from me but his effort is worth a 10/10 score. In fact, let’s make it 12/10. Jolene, Julianna’s colleague and roommate says it best when she declares ‘So help me god, if you don’t call him, I’m going to track him down and hump him against his will. If you’re too scared then I will happily be his rebound.’In addition to Jolene, who I hope gets her own book, there are appearances from characters in previous books. They form a great support cast by adding to the story without being a distraction.This was my first time reading one of Fiona Cole’s books. It definitely won’t be my last. I cannot recommend this book highly enough.

Fiona Cole is a military wife and a stay at home mom with a degree in Biology and Chemistry.

As much as she loved science she decided to postpone her career to stay at home with her two little girls and immersed herself in the world of books until finally deciding to write her own.

Where You Can Find Me is Fiona's debut novel and will hopefully be the first of many.